Is there anyone out there that would like to work on developing a logo for the Texas A&M Club of Maryland?

There are some rules that must be met, that have been established by Texas A&M and are being enforced by the Association of Former Students.

We are looking for something that can be used on the website, letterhead, and t-shirts. So when it is seen everyone knows it is part of the Aggie Network, but it is also our Maryland club!

If you are interested in developing a logo, please email me at marylandamc@aggientework.com and I will get the rules to you. 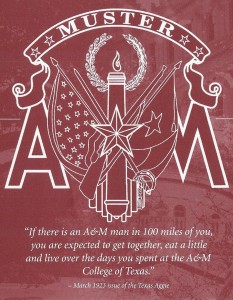 Please join us on April 21st, at 6:00 pm at the Johns Hopkins Applied Physics Lab Cafeteria for Aggie Muster.  Followed by dinner at La Palapa Too, Laurel

Century-old roots provide the basis for Muster as Aggies know it today. It has changed, yet the Spirit in which it was established remains the same. Since the founding of Texas A&M, every Aggie has lived and become a part of the Aggie Spirit. What we feel today is not just the camaraderie of fellow Aggies, it is the Spirit of hundreds of thousands of Aggies who have gone before us, and who will come after us. Muster is how that Spirit is remembered and celebrated, and it will always continue to unite Texas A&M and the Aggie family. A&M may change, but the Spirit never will.

In the Beginning…
Aggies gathered together on June 26, 1883, to live over again their college days, the victories and defeats won and lost upon the drill field and in the classroom. By April 21, 1903, this annual gathering evolved into a celebration of Texas Independence on San Jacinto Day. These early meetings included field games and banquets for Aggies to reflect and celebrate their memories of Aggieland. “Let every alumni answer a roll call,” wrote the Former Students. It was not until 1922, however, that April 21 became the official day of events for all Aggies; thus, the annual tradition of Muster was born. The March 1923 Texas Aggie urged, “If there is an A&M man in one hundred miles of you, you are expected to get together, eat a little, and live over the days you spent at the A&M College of Texas.”

We gather here to mark the day Aggies proudly stand.
To honor those who’ve gone before to the promised land.
Each name is called upon the roll, comrades answer “Here.”
Trumpets sound their sad good-bye to those we held so dear.
All heads are bowed in silent pledge never to forget.
While rifles fire their last salute echoes answer yet.
To their mem’ry we’ll be true; we will take their place.
One for all and all for one ever in Thy grace.
We’ll meet again another day, reunion while we pray
To ask Thy blessing on each one on this Muster day,
Aggie Muster Day. 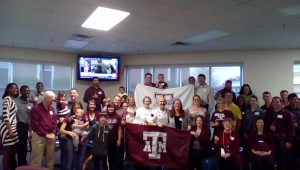 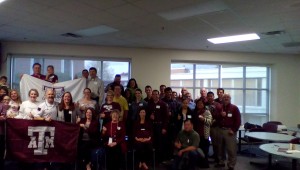 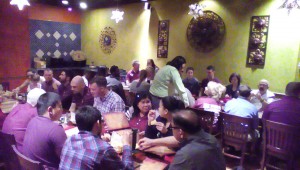 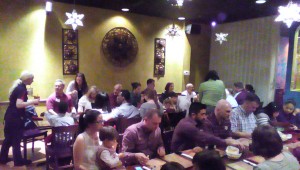 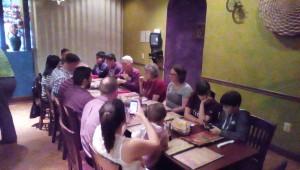 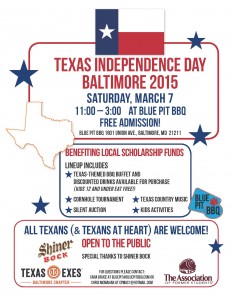 The event will feature a BBQ buffet, drink specials, Texas country music, activities for the kids, a silent auction, and a cornhole tournament!

Admission is free for all to the event.

The BBQ Buffet is $15 for Adults and kids 12 and under eat for free! Net proceeds from the event go directly into local scholarship funds, so please come out and support our club!

All Texans (and Texans at heart) are welcome, so feel free to invite your friends and family!

If you would like to ask some of your favorite places for items to donate to the Silent Auction please use the form attached here. We look forward to seeing you all and to some great items up for auction. 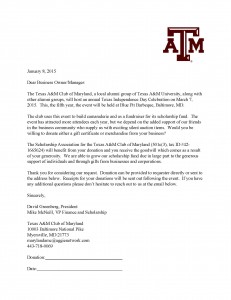 We have scheduled our winter social at Rinconcito Mexicano for Feb 7th 6:00 PM.

We hope to see everyone there.

Please let me know in the comments if you did not receive an evite and would like to attend. We need to have an accurate RSVP for the back room reservation.